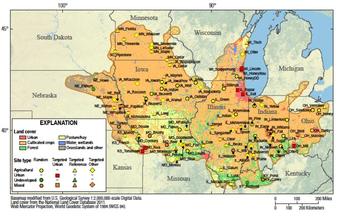 Bifenthrin is used to combat common household pests like ants and termites, to control mosquitos that could spread diseases like West Nile and Zika and on crops to kill aphids and other agricultural pests. About 1.2 million pounds of bifenthrin was used in the United States in 2013.

USGS scientists evaluated the effects of bifenthrin on natural communities of stream invertebrates, such as mayflies and midges, using artificial streams. Exposure to bifenthrin concentrations previously thought benign caused the insect populations to become less abundant and diverse, and caused an increase in algal growth as the larvae that feed on algae decreased. The insecticide also altered the timing of insect emergence from the larval state to become adults and complete their life cycle. The full study, reported in the scientific journal Environmental Science and Technology, is now available online.

“The results of this experiment demonstrate that not only do aquatic insects die at concentrations of bifenthrin previously thought nontoxic, but that bifenthrin changes the way that stream ecosystems function,” said Travis Schmidt, a USGS ecologist and the lead scientist on the study. “Bifenthrin disrupts the ability of insects to control algal blooms, and disrupts the emergence of flying aquatic insects that are a food source for bats, birds and other animals in and around rivers.”

This study is the one of several regional stream-quality assessments by the USGS. Findings will provide the public and decision makers with information regarding which human and natural factors are the most critical in affecting stream quality. Regions studied include the Southeast (2014), the Pacific Northwest (2015), the Northeast (2016) and California (2017).