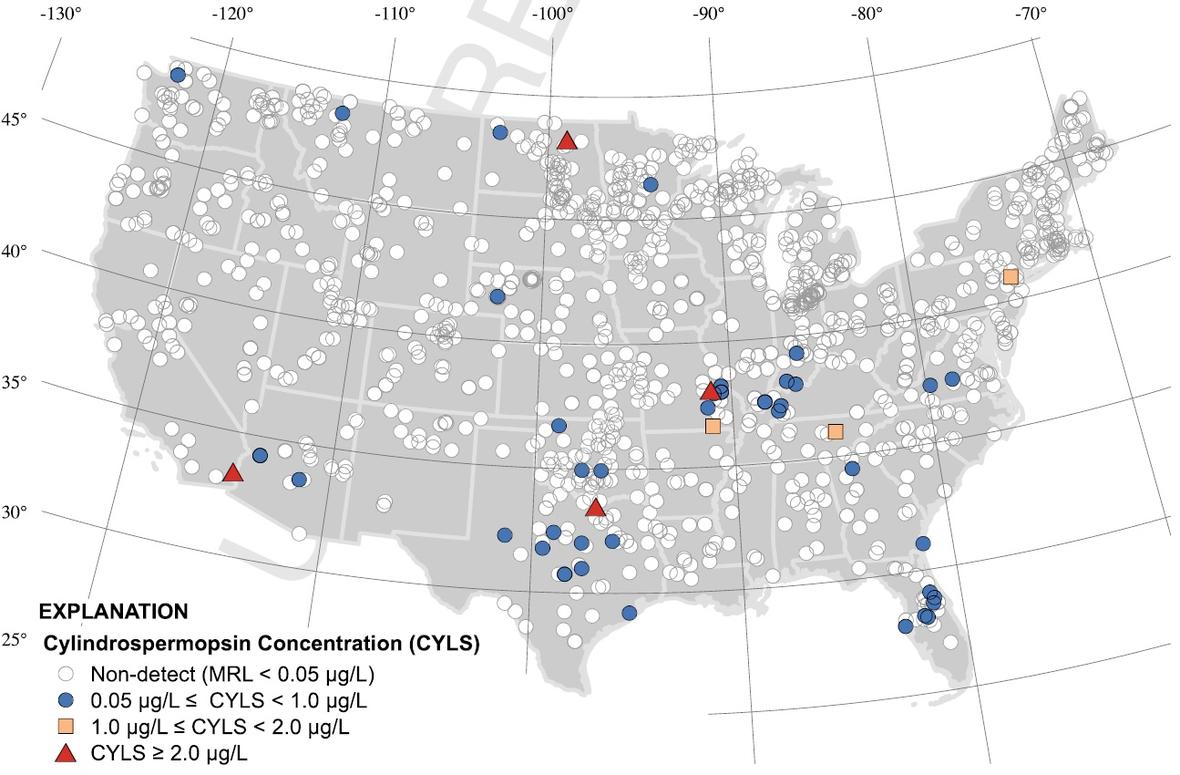 The first-ever National Lakes Assessment of toxins from harmful algal blooms challenges several long-held assumptions, including the extent, distribution and make-up of toxins from harmful algal blooms. The assessment, conducted by the U.S. Geological Survey and U.S. Environmental Protection Agency, sampled 1161 inland lakes and reservoirs throughout the United States.

Harmful algal blooms can be caused by numerous species of algae and bacteria, but this assessment focused on those caused by cyanobacteria, which are also known as blue-green algae. Toxins produced by cyanobacteria are known to have a range of lethal and non-lethal effects on humans, wildlife and companion animals. Additionally, cyanotoxins have been shown to accumulate at all levels of aquatic food webs in lakes and reservoirs, from plankton all the way up to top-level predators.

“Some had believed that toxic cyanobacterial harmful algal blooms were just a local or regional occurrence, but this study shows that they are distributed in lakes throughout the nation.” said USGS scientist Keith Loftin, lead author on the assessment.

This map shows all of the lakes tested and those in which samples contained cylindrospermopsin toxins.

“This assessment shows that multiple classes of cyanotoxins are present in lakes in diverse settings throughout the United States,” said Loftin. “This is a significant finding given the perception that cyanobacteria blooms are increasing in frequency and severity.”

Typically, studies done for harmful algal bloom event response programs are largely focused on near-shore areas, where harmful algal blooms can be very thick and recreational activities include swimming or fishing from shore.  In contrast, the National Lakes Assessment focused on samples collected in the center of lakes, where cyanobacteria and toxin concentrations can be much lower, and other types of recreational activities are more common, such as boating.

This map shows all of the lakes tested and those in which samples contained saxitoxin toxins.

“Algal toxins like these microcystins can be a serious issue, especially in regard to the water we use for recreation or drinking,” said Michael Focazio, program coordinator for the USGS Toxic Substances Hydrology Program. “For instance, in 2014 the City of Toledo, Ohio, alerted approximately 500,000 people that their drinking water supply was contaminated by microcystins.  That event drew national attention to the potential vulnerabilities of our water resources to toxins formed in association with harmful algal blooms.”

This shows that testing for microcystins alone is not a good way of showing that saxitoxins or cylindrospermopsins are present, Loftin said. He noted that relying on testing only for microcystins may lead to scenarios where potential risks from other cyanotoxin classes are unassessed in microcystin-only monitoring plans.

This map shows all of the lakes tested and those in which samples contained microcystin toxins.

Additionally, this study highlighted that testing for the presence of chlorophyll to show how much microcystin might be present is not reliable either. Chlorophyll is a green pigment that is associated with photosynthetic organisms such as cyanobacteria.

Current provisional World Health Organization recreational health risk indicators for protection against microcystins suggest using the amount of chlorophyll to gauge how much microcystin might be present. However, the National Lakes Assessment discovered that relying on chlorophyll that way overpredicted microcystin risk.

This assessment was performed as part of ongoing USGS research on the occurrence and factors that influence or create new environmental exposure pathways of cyanobacteria and associated algal toxins to aquatic ecosystems.

The present study provides new evidence of the widespread occurrence of cyanotoxins in the ambient water resources of the United States and highlights the importance of understanding factors associated with microcystin and other cyanotoxin occurrence.  Ongoing work by the USGS in the Pacific Northwest and planned work in the northeastern United States and California will expand the understanding of cyanobacteria and toxins in stream ecosystems.

The assessment can be accessed here. More information on this project and other USGS research on environmental health and water quality can be found at the USGS Toxic Substances Hydrology Program, the USGS Environmental Health Mission Area, and the USGS National Water Quality Assessment Program. To keep up-to-date on the latest USGS environmental health research, subscribe to the USGS GeoHealth Newsletter.