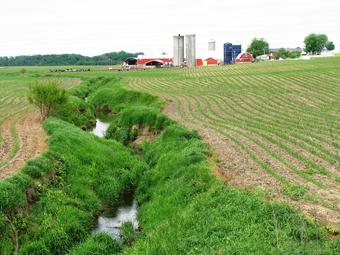 Drought periods followed by rainfall caused nitrate levels to increase to the highest ever measured in some Midwest streams during a 2013 study, according to a U.S. Geological Survey report published today in the Journal of Environmental Quality.

Nitrate, a form of nitrogen, is a common pollutant in U.S. streams and groundwater. Excessive concentrations in streams and lakes can adversely affect biological communities and spur algal growth, which can lead to harmful algal blooms and deplete oxygen in the water causing hypoxia, or “dead zones.”

The USGS and the Environmental Protection Agency collaborated in 2013 to sample 100 small streams across parts of 11 states in the Midwest. Scientists tested for a broad range of water-quality and habitat characteristics and assessed organisms living in the stream, including algae, invertebrates and fish. The study did not look at treated drinking water. The nitrate analysis included comparing 2013 findings to 20 years of nitrate results from multiple state and federal agencies for more than 1,000 streams across the region.

“The highest nitrate concentrations in 2013 were in streams in Iowa, closely followed by southern Minnesota and central Illinois,” said Peter Van Metre, a USGS hydrologist and the lead author of the study. “Drought conditions in 2012 allowed excess nitrogen to build up in the soils until spring rains in 2013 flushed the nitrate into streams, leading to unusually high levels.”

Researchers also concluded that the most important source of the nitrate was application of nitrogen-rich fertilizer and manure, primarily for corn production.

The EPA maximum contaminant level for nitrate in drinking water, 10 milligrams per liter, was exceeded in 19 percent of the 1,199 samples collected for the study. Although the small streams themselves are not used for drinking water, they contribute to water-supply reservoirs. High nitrogen levels can pose health risks to water users and can prompt drinking-water municipalities with the technology available to activate costly nitrate removal processes.

Large amounts of nitrate can be detrimental to aquatic ecosystems. Nitrogen sources in the Mississippi River basin, which includes the Midwest, have been linked to Gulf of Mexico hypoxia. An earlier USGS study reported that the total amount of nitrogen in the Mississippi River in late spring 2013 was much higher than normal, coinciding with the high nitrate levels measured in the small Midwest streams.

This study is the first of several regional stream-quality assessments by the USGS. Findings will provide the public and policy-makers with information regarding which human and natural factors are the most critical in affecting stream quality. Regions studied include the Southeast (2014) and the Pacific Northwest (2015), the Northeast (2016), and planning is underway for studies in California (2017).

Cows feed on a farm in southern Wisconsin. Public domain