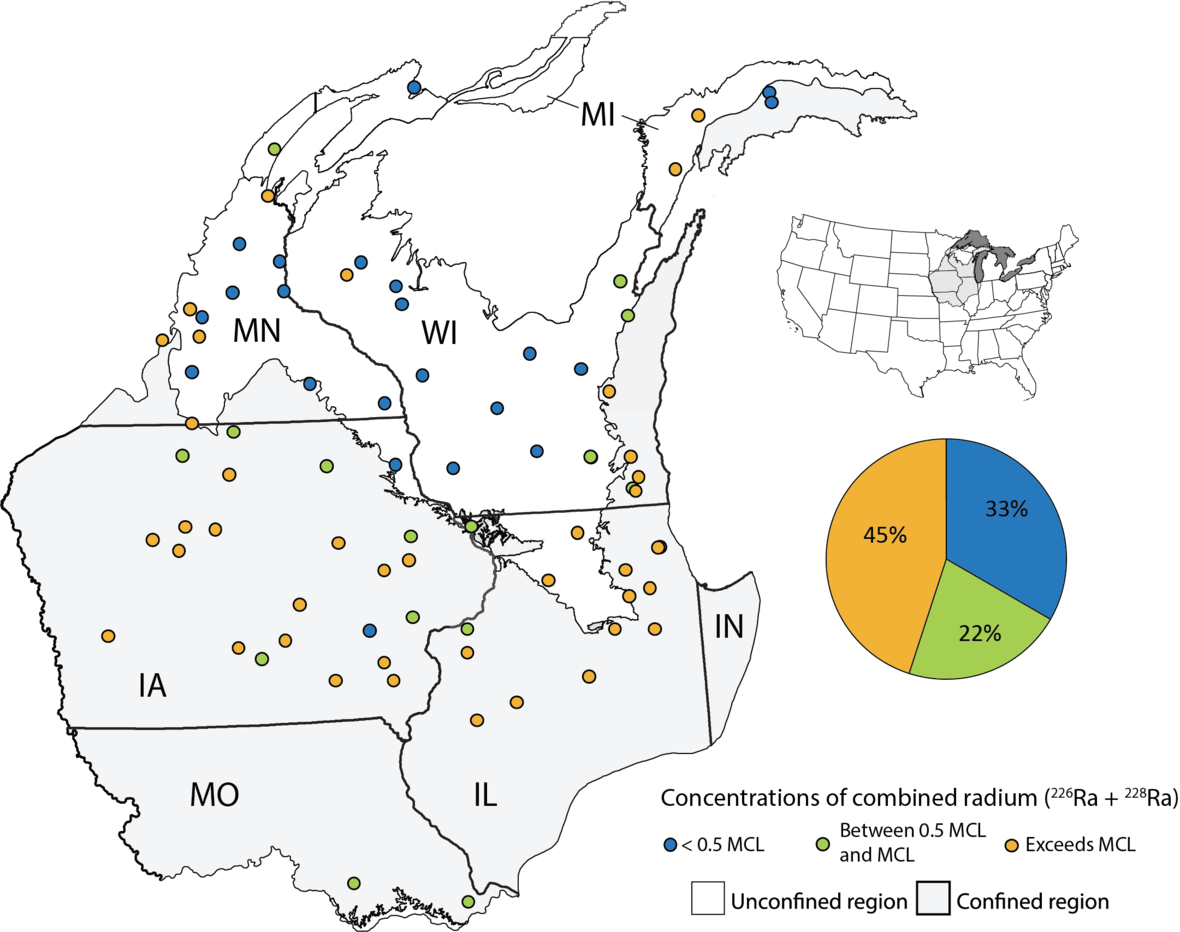 These processes — which cause radium to leach from aquifer rocks into groundwater — are responsible for high concentrations of naturally occurring radium in groundwater from the Cambrian-Ordovician aquifer. This aquifer provides more than 630 million gallons of water a day for public supply to parts of Illinois, Iowa, Michigan, Minnesota, Missouri, and Wisconsin.

A newly published USGS study helps explain how radium isotopes 224, 226, and 228 make their way into water in the Cambrian-Ordovician aquifer and where concentrations are highest. Knowing where and how much radium is in groundwater is important because of the health risks associated with drinking water that’s high in radioactive isotopes. Known health risks include bone cancer and leukemia.

“Millions of people rely on the Cambrian-Ordovician aquifer for drinking water,” said Paul Stackelberg, USGS hydrologist and study lead. “By helping to identify the conditions that cause high levels of radium in water from the aquifer, we can help water utilities and resource managers understand where radium levels are likely to be high and thereby prioritize resources for monitoring activities, alternative water resource development, and public education programs.”

Radium can be removed from drinking water through treatment, thereby limiting the health risks it poses. The groundwater tested in this study came from public supply wells, before treatment and distribution. Private wells were not tested during this study, however, more than half a million people get their drinking water from private wells that tap the Cambrian-Ordovician aquifer. These homeowners might consider having their water tested for radium.

Previous water-quality testing by federal, state, and local agencies has found that radium isotopes 226 and 228 occur in the Cambrian-Ordovician aquifer at levels that exceed those in most other U.S. aquifers and that, in some locations, are higher than the EPA maximum contaminant level (MCL) for radium.

The USGS study also measured a third radium isotope, 224, that was not tested for in previous studies. Radium 224 adds radioactivity to groundwater but has no EPA MCL because its risks to human health are lower than isotopes 226 and 228. The levels of isotope 224 were found to be nearly equal to 228 but generally less than 226.

This study, part of the USGS National Water Quality Assessment Project, investigated the conditions that cause higher-than-typical amounts of radium in water from the Cambrian-Ordovician aquifer. By looking at variables like groundwater age, dissolved minerals, and dissolved oxygen levels in 80 samples collected across six states, researchers were able to better understand the conditions that cause radium to leach into groundwater at higher levels. Water that was recharged into the aquifer long ago, that contains greater amounts of dissolved minerals, and that is low in dissolved oxygen is more likely to leach radium from its surrounding rock.

Map: Concentrations of radium in samples of untreated groundwater from the confined parts of the Cambrian-Ordovician groundwater system frequently exceeded the USEPA maximum contaminant level of 5 picocuries per liter in Illinois, Iowa, and eastern Wisconsin, where wells tap deeper, older groundwater. Click map to enlarge.

“Radium mobility and the age of groundwater in public-drinking-water supplies from the Cambrian-Ordovician aquifer system, north-central USA,” is available online in the journal Applied Geochemistry.