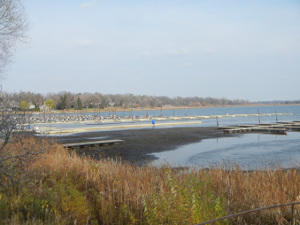 Both precipitation and groundwater withdrawals, among other factors, influence lake-water levels in the northeast Twin Cities metropolitan area, and the extent of these changes vary among lakes, according to a new U.S. Geological Survey study.

Scientists with the USGS and partners studied groundwater and lake-water exchanges in White Bear Lake, Big Marine Lake, Lake Elmo and Snail Lake during 2003 through 2013, a period of increasing urbanization and declining water levels for some lakes in northeast Twin Cities metropolitan area. They found that long-term declines in lake-water levels can be caused by increasing groundwater withdrawals or decreases in precipitation, and that increases in groundwater withdrawals during dry periods exacerbate water-level declines.

“Our study helps explain changes in water levels in several lakes in the northeast metropolitan area that were recently below normal, such as White Bear Lake,” said Perry Jones, a USGS scientist and lead author of the report. “Results from the study also allow managers to assess the long-term effects of groundwater withdrawals on lake water levels, especially during drought.”

Previous USGS studies showed, and the new study confirms, that lake water seeps into underlying aquifers in the northeast metro area. For the new study, the scientists developed a groundwater-flow model to examine how significantly this seepage affects long-term water levels in the four lakes.

The model showed that closed-basin lakes, which are lakes not connected to other lakes and streams such as White Bear Lake, Big Marine Lake and Snail Lake, might be more vulnerable to changes in precipitation and groundwater withdrawals. Specific findings include:

The study also showed that evaporation from lake surfaces and flow of lake water to underlying aquifers are the largest losses of water from the four lakes. According to the model:

“Based on our findings, many Twin Cities lakes should be considered water sources to aquifers, as well as to numerous wells withdrawing water from the aquifers,” Jones said.

The USGS partnered with the Metropolitan Council and the Minnesota Department of Health on the new study, which was directed by the Minnesota Legislature.

Not All Arsenic Tests are Created Equal