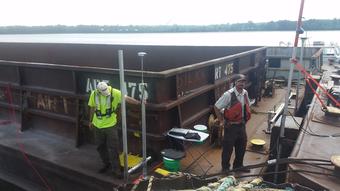 Results of the study indicate the potential for small fish to be transported through the electric dispersal barrier, which was built to keep invasive species such as Asian carp from passing between the Mississippi River and Great Lakes Basins. However, there is no evidence to date that Asian carp have crossed the Electric Dispersal Barrier System in the Chicago Sanitary and Ship Canal.

USGS and FWS scientists study the interaction of moving barges and small fish on the Illinois Waterway. Public domain

The study was conducted in 2015 to examine the potential for upstream transport of invasive Asian carp. Barges, which are flat-bottomed boats that carry freight, regularly move from locations where Asian carp are abundant to areas where Asian carp are not yet established. Once trapped, fish may be transported upstream over long distances, upwards of nine miles, and through navigational locks and the Electric Dispersal Barrier system on the Illinois Waterway. The new report is published online in the Journal of Great Lakes Research.

“This study is a great example of how federal agencies, state partners and industry are working together using the most advanced technology available to identify potential risks and find solutions to the difficult problems presented by Asian carp in the Illinois Waterway,” said Jeremiah Davis, a biologist with the U.S. Fish and Wildlife Service and senior author of the study.

Results show that as a barge tow moves upstream, the three feet of water surrounding the barge and the water included in the gap between barges is also dragged upstream. The speed of the water surrounding the barge can be fast enough to overcome the swimming ability of small fish, allowing fish to be drawn into and trapped in the gap between barges. To assess the number of fish that move upstream with a barge tow scientists marked free-swimming fish and released them in front of the barge or in the gap between barges. Scientists later recaptured the fish upstream using nets cast in the gap space. The study used golden shiners, a fish native to the Illinois Waterway and similar in size and swimming ability to small Asian carp.

“Measuring the flow around a barge as it travels allows us to better understand the forces these fish are subject to as a barge passes by,” said Ryan Jackson, a USGS hydrologist and co-author of the study. “These results will be used by resource managers in designing potential mitigation efforts to prevent upstream transport of invasive species.”

The FWS and the USGS plan to continue investigating barge tow operations to reduce the likelihood of trapping and transporting fish in the gap between barges. Future studies will also test the trapping of small fish in parts of the Illinois Waterway with abundant Asian carp populations.

USGS scientist monitors the measurement of flow around the barge. Public domain

USGS scientist monitors the measurement of flow around the barge. Public domain