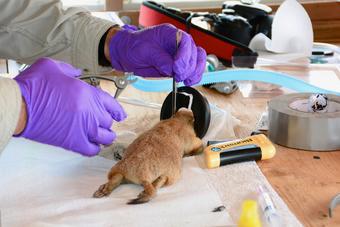 A veterinarian takes hair samples from a prairie dog that’s under anesthesia before scientists release the animal back into the wild. Portions of hair from sylvatic plague-vaccinated animals turn the color of the vaccine-laiden bait under UV light. (Credit: Marisa Lubeck, USGS)

Sylvatic plague can decimate prairie dog populations, which in turn affects the recovery of endangered black-footed ferrets that depend on prairie dogs for food. Protecting wildlife from plague and reducing spread of the disease can also help people and pets that are susceptible to infection.

In a large-scale, three-year field trial, scientists with the USGS and other state and federal partners distributed the peanut butter-flavored, SPV-laden baits throughout 12 locations near active prairie dog burrows in Arizona, Colorado, Montana, South Dakota, Texas, Utah and Wyoming. A harmless dye was incorporated into the baits, which, once ingested, is viewable under certain microscopes. The scientists sampled hair and whiskers from 7,820 prairie dogs for presence of the dye to determine which animals had eaten the baits.

“The results showed that heavier prairie dogs were more likely to eat baits than smaller animals, and for most prairie dog species, the quality and density of vegetation such as grass influenced bait consumption,” said Rachel Abbott, a USGS scientist and lead author of the study.

Overall bait consumption, or uptake, ranged from 68-72 percent during the 2013-2015 sampling period, although uptake rates varied by species. The scientists also found that vegetation in the prairie dog colony and the day of baiting affected consumption for black-tailed, Gunnison’s and Utah prairie dogs. For those three species, baiting later in the season, when green vegetation is less dense, can improve the ingestion rates by smaller animals.

“Wildlife managers can use these findings to develop SPV-baiting strategies that maximize consumption and immunization in targeted prairie dog populations,” said Tonie Rocke, a USGS coauthor of the study.

Scientists with the USGS National Wildlife Health Center and the University of Wisconsin – Madison developed the SPV, which, according to a recent report, is largely successful at controlling outbreaks of plague in prairie dog communities.

The development of a safe, effective and economical SPV is part of a multi-partner collaboration to increase populations of endangered black-footed ferrets. The vaccine may also aid in the recovery of the Utah prairie dog or help prevent the Gunnison’s prairie dog from becoming at risk.

In Orlando, USGS Science on the Health of the Environment is on Display