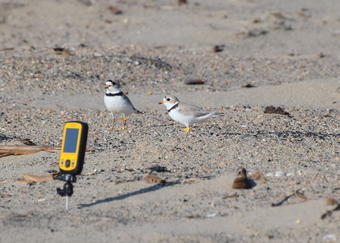 Two banded piping plover adults stand near a nest with a video camera pointed at it on a sandbar in the the Missouri River. Video cameras were used to identify adults attending nests.

Piping plovers are small-bodied, short-distance migratory shorebirds. The Northern Great Plains population has been listed as a threatened species under the U.S. Endangered Species Act since 1985. Previously, wildlife managers had assumed four separate breeding groups within the Northern Great Plains and that individuals from these groups moved infrequently between habitats. Earlier studies based on this assumption resulted in a low extinction risk for the species.

Scientists analyzed movement, survival and renesting rates in two of the assumed breeding groups of piping plovers over four distinct management units along the Missouri River and alkaline wetlands distributed throughout the prairie pothole region from 2014 – 2019. Piping plover reproductive rates were studied between 2014 – 2016. The study areas are within North Dakota, South Dakota and Montana and include the U.S. alkali wetlands, Lake Sakakawea, the Garrison Reach of the Missouri River, and Lake Oahe.

Results show river and alkali wetland habitats appear to be of higher quality than reservoir habitats, which had lower annual survival, increased movement away from the habitat, lower renesting success, and lower reproductive output.

Habitat availability affected nearly every parameter examined in this study. In general, when more habitat was available, piping plover vital rates improved. These findings support the current focus of managing the Missouri River for abundant breeding habitat for piping plovers.

Study findings show managing for successful first nests for Northern Great Plains piping plovers is key to improving reproductive output. Piping plovers are intensively managed throughout their range, and in the Northern Great Plains, management of habitat, water and predation, including vegetation removal and protective fences around nests, are common conservation strategies. Therefore, intensive management focused on the protection of early nests or first nest attempts would likely be more effective than strategies that assume equivalent productivity from renests.

The study also shows that piping plovers move between the northern Missouri River habitat and the U.S. alkali wetlands at a rate that is substantially higher than previously assumed. Further, movement rates were unbalanced and varied between hatch-year and adult plovers. Adults were more likely to forego breeding altogether than to relocate to alternate management units and breed. This implies that either the rates of movement or the way local bird populations are managed may need to be reevaluated.

This study was done in cooperation with U.S. Army Corps of Engineers and U.S. Fish and Wildlife Service. For more information on USGS ecosystems research in the Prairie Pothole Region, please visit the USGS Northern Prairie Wildlife Research Center website.

A piping plover adult stands on a sandbar on the Garrison Reach of the Missouri River, North Dakota. The yellow alphanumeric leg flag and color bands that identify it are clearly visible. Credit:USGS Public domain.