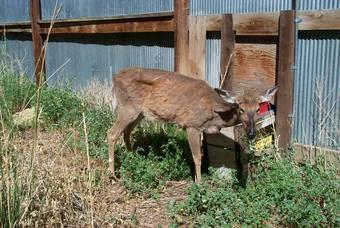 Scientists with the USGS and partners developed a novel scientific model to forecast the growth and spread of chronic wasting disease, or CWD, in white-tailed deer in southwestern Wisconsin. The model showed that CWD prevalence increased rapidly during the latter portion of the 2002-2014 study period, particularly among older male animals, and that the trend will likely continue throughout affected areas.

The scientists also found that the model outperformed traditional prediction methods, can be applied to many other diseases throughout the country and can help forecast the spread of invasive species.

This map shows the distribution of chronic wasting disease in North America as of March 2017.

“This tool is valuable because, by predicting where threats might emerge and how areas are affected, it can help wildlife managers apply proactive strategies before the threats arrive and develop effective control programs if they establish,” said Daniel Walsh, a USGS scientist and an author of the study. “Such strategies can help protect critical resources and save money that would be needed for mitigation.”

CWD is a fatal nervous system disease affecting elk, moose, white-tailed deer and mule deer throughout the United States and Canada. It’s costly to manage, but is not known to affect humans or livestock.

Landscape features such as rivers, forests and human development influence deer movements and CWD expansion. Using the model, scientists found that CWD could spread nearly two times faster within the Wisconsin River corridor when compared to an area outside of the corridor, and will likely grow faster in highly forested areas than in areas of low forest cover.

The tool can help scientists and managers forecast the spread of other dangerous diseases, including human diseases. It can also be used to better understand and manage the dispersal of invasive species, which scientists estimate cost over $120 billion in damages annually to the U.S. economy.