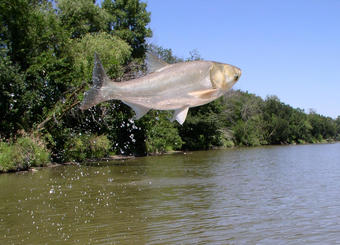 This information is critical in helping resource managers mitigate effects of an Asian carp invasion. Great Lakes fisheries generate economic activity of approximately $7 billion annually in the United States alone. Due to the introduction or invasion of many non-native species, Lake Michigan’s ecosystem has already undergone broad and rapid change in fish and other aquatic life. If bighead and silver carp were to populate Lake Michigan, they have the potential to adversely affect the ecosystem and fishing industry.

Scientists used predictive models to simulate fish growth and food consumption to determine the suitability of the Great Lakes to Asian carp invasions. USGS scientists used satellite imagery of Lake Michigan showing near-surface algae to determine how much food would be available for Asian carp. Green algae and blue-green algae, specifically floating algal blooms that can be seen on the surface, are a preferred food source for Asian carp. The water temperatures and algal concentrations detected in Lake Michigan from 2009-2011 show that the bighead and silver carp populations could not only live in this environment, but continue to grow.

“Most areas of the lake had insufficient algal food for bighead and silver carp, but the model indicates that nearshore areas and embayments had plenty of algal food to support survival and growth,” said Karl Anderson, USGS scientist and lead author of the study.

These findings imply that if bighead and silver carp were to invade Lake Michigan, they might not spread randomly across the lake; rather follow coastlines where sufficient algal food exists. Coastal areas are particularly important not only for fisheries and biological reasons, but also because human activity is more common near shore than in the vast open areas of Lake Michigan. Silver carp often react to boats by jumping; this activity is a nuisance because silver carp often jump into boats, harming people and property. Concentration of silver carp near the coastline would enhance the propensity of such nuisance interactions with boaters.

Silver carp are known for their leaping ability, especially when excited by boats.