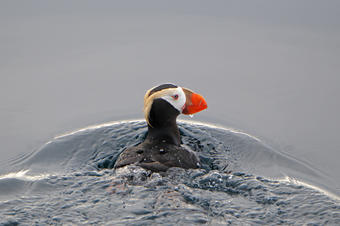 A tufted puffin, the species most affected by a recent seabird die-off in the Pribilof Islands, Alaska. (Credit: Sarah Schoen, USGS)

A beach littered with bird carcasses is a sobering sight. Since mid-October, hundreds of dead seabirds have washed ashore the north and east sides of St. Paul Island, Alaska, an otherwise serene volcanic island landscape in the Bering Sea.

Most of the carcasses being found are tufted puffins, a charismatic species of seabird with striking, silky tassels of feathers positioned like ponytails behind their white-masked eyes. However, horned puffins, murres and crested auklets have washed ashore as well, according to biologists from the Aleut Community of the St. Paul Island Tribal Government Ecosystem Conservation Office (ACSPI ECO).

“Seabirds, including puffins, are important to local residents for their cultural and subsistence uses, and are appreciated by bird watchers from around the world,” said John Pearce, a scientist with the USGS Alaska Science Center. “Seabirds can also provide important signals about local conditions in the marine environment, such as the abundance and availability of forage fish.”

The ACSPI ECO and Coastal Observation and Seabird Survey Team (COASST) reported to the U.S. Fish and Wildlife Service that as of November 17, the encounter rate of puffin carcasses over a three-week period was hundreds of times greater than normal compared to past surveys at St. Paul. In total, nearly 300 carcasses of a variety of beached seabird species have been counted since mid-October.

Only a fraction of birds that die at sea become beached, and of those, only a small portion are observed by people before they are removed by scavengers. As a result, many more birds may be affected by the die-off than has been recorded.

A horned puffin, one of the species affected by a recent seabird die-off in the Pribilof Islands, Alaska.(Credit: Sarah Schoen, USGS)

To determine cause of death, eight puffin carcasses – six tufted puffins and two horned puffins – were collected by ASCPI ECO biologists and sent to the USGS National Wildlife Health Center in Madison, Wisconsin, where scientists conducted necropsies, or animal autopsies, on the birds. The USGS found that these fish-eating puffins were severely emaciated and likely died of starvation. The animals showed no sign of disease.

Starvation of the birds could be related to a lack of prey or changes in prey distribution as a result of abnormal sea temperatures. Unusually high sea surface temperatures were recorded in October for the Bering, Beaufort and Chukchi Seas. Coupled with record low levels of sea ice, these temperatures could affect populations of forage fish and squid upon which seabirds like puffins depend.

In 2015-2016, the USGS and USFWS investigated and documented a large-scale die-off of common murres in the Gulf of Alaska with similar findings of starvation.

The USGS is working with the USFWS, COASST, ACSPI ECO, the National Oceanic and Atmospheric Administration and the Alaska Department of Fish and Game to determine the full extent of the St. Paul seabird die-off. Together, these partners will continue to investigate the seabird mortality event.

The public can help, too. According to the USFWS, people can report sick or dead birds to 1-866-527-3358 or AK_MBM@fws.gov. Please include the following information:

The USFWS warns that people should not touch or collect any sick or dead birds. Please leave the birds where they are when documenting a mortality event.

February 2019 update: More information about the effects of harmful algal blooms on Alaska’s seabirds is available at a 2018 USGS Fact Sheet.