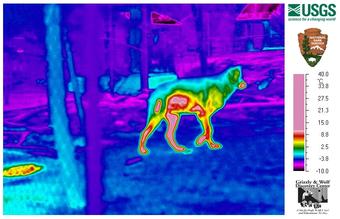 Note the bright red patch on the wolf’s hindquarters in this thermal image of a captive wolf at the Grizzly and Wolf Discovery Center in West Yellowstone. This is where fur was shaved to replicate the loss of fur associated with sarcoptic mange. The fur will eventually grow back. USGS scientists are examining thermal imagery of wolves as one step in assessing impacts of sarcoptic mange on the survival, reproduction and social behavior of this species in Yellowstone National Park. All research animals are handled by following the specific requirements of USGS Animal Care and Use policies.Public domain

During winter, wolves infected with mange can suffer a substantial amount of heat loss compared to those without the disease, according to a study by the U.S. Geological Survey and its partners.

Using a remotely triggered thermal camera to capture vivid and colorful images, scientists gathered body temperature data from mange-infected gray wolves in Yellowstone National Park and compared that to a sample group of healthy captive wolves with shaved patches of fur to simulate mange-induced hair loss. Using these data, scientists were able to quantify the level of heat loss, or energetic costs, during the winter months.

Results show that a more severe mange infection could increase heat loss by around 1240 to 2850 calories per night which represent roughly 60-80 percent of the average wolf’s daily caloric needs.

“That lost heat has to be replaced, otherwise the wolves’ core body temperatures would be getting colder,” said Paul Cross, USGS ecologist and lead author of the study. “To replace that lost heat wolves would need the equivalent of about two to four extra pounds of elk meat per day.”

Sarcoptic mange, present in one of 10 known packs in Yellowstone as of 2015, is a skin disease caused by a mite that burrows into the skin, causing irritation and scratching that then leads to hair loss. Researchers engineered the remotely-triggered thermal camera for use in Yellowstone to record the surface temperatures of wolves with and without mange-induced hair loss. Those images could then be compared with images from healthy, captive wolves. In addition, field crews observed or photographed all radio-collared wolves and their pack mates for the purpose of recording infection status.

The study also found that increased wind speed was a more significant factor in heat loss than colder temperatures. To compensate for the extra heat loss, infected wolves would need to increase food consumption in addition to other daily energy demands for survival. For wolves with mange this is more difficult as hair loss and depressed vigor leaves them vulnerable to hypothermia, malnutrition and dehydration, which can eventually lead to death.

Data from GPS-collared wolves in Yellowstone indicated that wolves with mange reduce daily movement distances depending on the degree of infection. In addition, the wolf with the most hair loss became more active during the day than during the twilight hours, which is opposite behavior of a healthy wolf.

“By definition, parasites drain energy from their hosts. In this study we estimated just one portion of the energetic costs of infection,” said Cross. “Even when parasites do not kill their hosts they are affecting the energy demands of their hosts, which could alter consumption rates, food web dynamics, predator-prey interactions and scavenger communities.”

Researchers at the USGS Northern Rocky Mountain Science Center and their partners place thermal remote cameras near deer and elk carcasses in Yellowstone National Park to capture images of wolves with mange feeding in the wild. Red-colored blotches in the thermal images reveal areas of hair loss from which wolves with mange lose heat.Public domain

Mange was introduced into the Northern Rockies in the early 1900s by the Montana state wildlife veterinarian in an attempt to help eradicate local wolf and coyote populations. The disease persists in coyotes and foxes and once wolves were reintroduced into the ecosystem in 1995-96, they appeared to be free of mange until 2002.

The article “Energetic costs of mange in Yellowstone wolves estimated from infrared thermography” is published in Ecology.

Researchers at the USGS Northern Rocky Mountain Science Center and their partners place thermal remote cameras near deer and elk carcasses in Yellowstone National Park to capture images of wolves with mange feeding in the wild. Red-colored blotches in the thermal images reveal areas of hair loss from which wolves with mange lose heat.Public domain