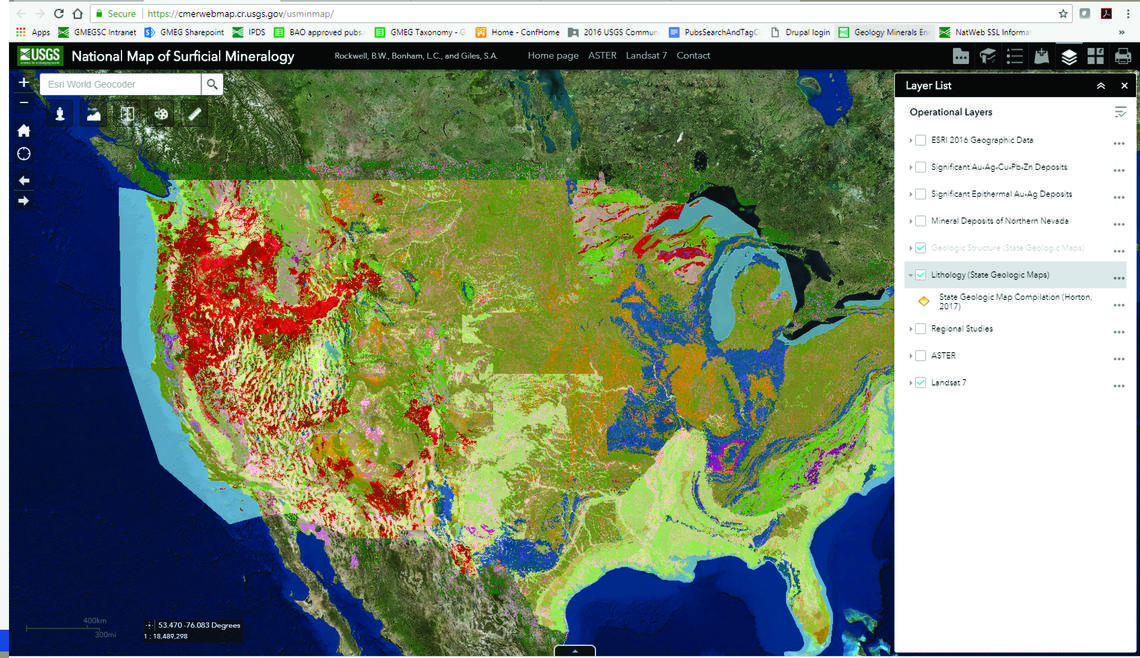 Fortunately, in an effort with needlepoint detail, the U.S. Geological Survey has stitched together geologic maps of the Lower 48 States, providing a seamless quilt of 48 State geologic maps that range from 1:50,000 to 1:1,000,000 scale.

The new product, called the USGS State Geologic Map Compilation, is a database compilation based on the Preliminary Integrated Geologic Map Databases for the United States. It provides a standardized Geographic Information System format that allows users to more readily conduct spatial analyses of lithology, age, and stratigraphy at a national-scale. As an example, a named rock unit (Dakota sandstone) might be called something different from State to State, on their respective State geologic maps. In the new database, rock units are characterized by their type (lithology) like “sandstone or granite” not by their formal name. This consistency across the single database now makes it easier for users to access information, rather than having to collect it from multiple databases.

One Database, Many Users

The shale oil boom: how much oil is really there? Critical minerals: does the United States have what it needs for your smartphone, air conditioner and car, let alone our military? Earthquakes and volcanoes: which hazards do we face? All these questions are addressed with geologic maps!

Geologic information forms the bedrock of much of the work USGS does. On the traditional geologic research side, these data will inform assessments of energy and mineral resources, quantifying volcano and earthquake hazards, and mitigation of potential environmental effects from mining.

However, high-quality geologic maps and their underlying databases extend beyond the obvious links. Tracking groundwater—an important source of drinking water and irrigation to millions in the United States—requires accurate data about rock formations and faults (the groundwater’s plumbing, as it were). In addition, understanding the nature of geologic formations can assist with infrastructure development, such as where to put dams and bridges, as well as agricultural planning.

Finally, a national digital geologic map database is vital to those who use other national-scale datasets, such as geochemistry, remote sensing, and geophysical data. Trying to match a national-scale dataset with a dataset of just Mississippi, for instance, would open the door to confusion, mistakes, and some serious Delta blues.

New Maps, New Data, and Easier to Use

We corrected numerous errors and added enhancements to the preliminary datasets using thorough quality assurance/quality control procedures. We ensured attributes adhered to data dictionaries created for the compilation process and corrected spatial and topological errors. Also, we have standardized the geologic data contained in each State geologic map to allow spatial analyses of lithology, age, and stratigraphy at a national scale.

The changes make the data more consistent between the States as well as with the original State geologic maps. It also streamlines tasks that previously required combining multiple geographic information system datasets and tables.

Stitching the Pieces Together

This new product is like a quilt, with a top layer that is pieced together from many pieces of cloth and a single piece of cloth underneath that forms the backing. In our analogy, the top layer is a GIS map layer that stitches together individual state geologic maps to form a national map, and the bottom layer (or backing) is a single consistently formatted database that means each of the pieces on top have the same structure underpinning them. Now that a newly updated, single database (backing) is holding all the information, multiple individual pieces can be viewed and queried as a whole.

Prior to the State Geologic Map Compilation, we had standardized individual GIS databases for each state, but none of them were connected. Anytime someone wanted to do national or regional scale work, they had to go to multiple databases, then piece what they wanted together.  The improvements to this updated version create a single, conterminous State geologic map database.

Series of images that show how users of the State Geologic Map Compilation can zoom in from broad national scale to more a detailed local scale. The more detailed image is of the Bingham canyon mine area in Utah. (Public domain.)

Putting Geology on the Map

For the visual learners out there, map services of the State Geologic Map Compilation data have been created which can be used in numerous web mapping applications including the USGS National Map. This allows the data to be explored without specialized geographic information systems software.  To use it, go here, then use the “Add Data” button on most web mapping applications to access the data in web browsers.

Out of Many, One…Database, That Is

Just as quilts are rarely the work of a single needle, this mosaic of geologic maps and data was sewn by many hands. The State Geologic Map Compilation of the Conterminous United States was developed by the USGS Mineral Resources Program. The project owes its success to numerous USGS Mineral Resources Program staff who originally compiled the Preliminary Integrated Geologic Map Databases for the United States as well as the foundational geologic mapping work completed by U.S. State Geologic Surveys and academia.  Special thanks to the Montana Bureau of Mines & Geology for their tremendous work in preparing the Geologic Map of Montana to be included in the State Geologic Map Compilation.

A screenshot of the State Geologic Map Compilation. (Public domain.)

As mentioned previously, one limitation of the State Geologic Map Compilation is that geologic units haven’t been integrated across state boundaries. That means that, in some locations, a geologic formation that spans the border of, say, Colorado and Kansas might be represented by polygons with different names in Colorado and Kansas. We preserve what the States named each rock unit, then we use a standardized rock coding to show what kind of rock the unit is, regardless of what it is named. So now, for instance, if you wanted, you could look for every shale formation in the Lower 48 that was the same age as the oil-rich Bakken Formation of North Dakota and Montana.

A long-term goal of the USGS is eventually to have a fully integrated geologic map at useful scales of the entire country. That map and its underlying databases would be invaluable to Federal, State, and local government, as well as private companies and academia. It would greatly enhance studies of mineral resources, groundwater resources, geologic natural hazards, and aspects of environmental health, as well as agricultural and infrastructure planning. It is no exaggeration to say it could serve as the foundation for a renaissance in Earth science in the United States.