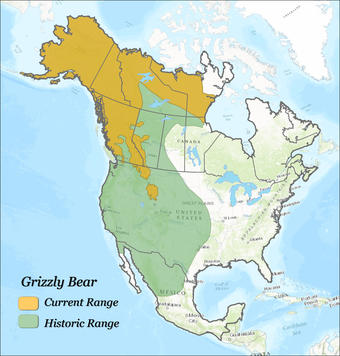 “we found a number of carcases [sic] of the Buffaloe [sic] lying along the shore, which had been drowned by falling through the ice in the winter and lodged on shore by the high water when the river broke up about the first of this month. we saw also many tracks of the white bear of enormous size, along the river shore and about the carcases of the Buffaloe, on which I presume they feed. We have not as yet seen one of these anamals, [sic] tho’ their tracks are so abundant and recent. The men as well as ourselves are anxious to meet with some of these bear.” Merriweather Lewis.

It was in 1805 that the Corps of Discovery first sighted what they called the “white bear,” likely described as such due to the wide range of fur color. The telltale feature of silver tips on the hair later inspired the common name “grizzly bear.”  At this time, it is estimated that grizzly bears roamed most of western North America, including the river bottoms of the Great Plains.

Over 200 years after Lewis and Clark first encountered this symbol of the American West, the number of grizzly bears had dwindled to a fraction of their historical numbers due to overkilling and landscape changes.  By the late 1960s only about two percent of their historic range in the lower 48 states remained occupied.

The Greater Yellowstone Ecosystem is considered one of the last strongholds of the wild American West.  An area the size of New Hampshire, Massachusetts and Connecticut combined, it is home to spectacular geologic wonders such as the “Old Faithful” geyser and iconic animals such as bison, elk and the Yellowstone grizzly bear, an animal that, to some, evokes awe and wonder, and symbolizes wildness.

In 1973, as a result of management concerns and lack of information regarding the status of the Yellowstone grizzly bear population, the U.S. Department of Interior formed a group of scientists known as the Interagency Grizzly Bear Study Team or IGBST.  In 1975 grizzly bears in the lower 48 states were listed as Threatened under the Endangered Species Act.  Early research by the IGBST indicated that following listing, the population continued to decline into the 1980s. This information was the foundation and impetus for the formation of the Interagency Grizzly Bear Committee (IGBC) in 1983. Subsequent management policies by the IGBC and others likely halted the population’s decline.

What more than 40 years of science tells us.

Grizzly bears can live over 30 years and have relatively slow reproductive rates, meaning that long-term studies are crucial to understanding their biology.  The IGBST, led by the U.S. Geological Survey, has been leading research efforts on this charismatic animal for over 40 years; perhaps the largest collection of scientific information on any bear species in the world.  The IGBST began “radio-collaring” grizzly bears in the Greater Yellowstone Ecosystem in 1975.  Data collected from radio-marked bears provide information necessary for tracking key population parameters.  By tracking radio-collared bears, the IGBST documents the age of first reproduction, average litter size, cub and yearling survival, how often a female produces a litter, and causes of mortality.  These data allow the IGBST to estimate survival among different age classes of female and male bears.  In conjunction with other estimates, such as the number of females with cubs and annual mortality, this information is used to estimate population size and evaluate annual mortality levels relative to population size.  Location information obtained from collared bears also provides reliable data that helps resource managers focus their activities toward landscape and habitat issues that may impact the Yellowstone grizzly bear.

Biologists with IGBST and the National Park Service fit a grizzly bear with a radio collar.  Once a bear is radio collared, biologists can track its movements with telemetry. (Credit: IGBST, USGS. Public domain.)

Though the IGBST monitors both male and female bears, adult females are the most important demographic segment because they are the reproductive engine of the grizzly bear population and are a major focus of the long-term research program in the Greater Yellowstone Ecosystem.  The tracking trend for this segment of the population is generally representative of the trend for the entire population.  If scientists observe growth in numbers of females with cubs, it can be reasonably assumed the entire population is growing.  The IGBST documents abundance and distribution of females with cubs and, when combined with other data, these estimates serve as the basis for estimating total population size.  By monitoring female bears, scientists have shown that the grizzly population has grown rapidly since the mid-1980s through the early 2000s.  Although the population remains isolated and genetic diversity is less than other populations in North America, recent data indicate very minor (0.2%) loss in genetic diversity through recent decades.

Population growth has slowed since the early 2000s, and evidence indicates this slowing was associated with increasing bear densities rather than declines in food supply, such as whitebark pine.  Whereas population growth has slowed in core areas of the ecosystem, range expansion continues and is now well beyond the area monitored by the IGBST.  The current estimate of occupied range for the Yellowstone population is approximately 65,000 square km, or over 25,000 square miles – quadrupling their previously occupied territory when listed in 1975.  The IGBST estimates that the population has rebounded to a minimum of 700 bears.

Over forty years of continuous scientific discovery about the Yellowstone grizzly bear by the USGS and its partners has provided a comprehensive assessment of the status and ecology of this population. This information was instrumental in the decision by the U.S. Fish and Wildlife Service to publish a Final Rule in June 2017 to remove the Yellowstone Ecosystem population of grizzly bears from the federal list of Endangered and Threatened Wildlife.

As grizzly bears keep expanding their range into habitats with increased human presence, they are more likely to run into conflicts such as interactions with livestock and humans, which can result in bear deaths.  By tracking bear deaths, scientists can identify patterns that help wildlife managers protect both grizzly bears and humans.  The IGBST also uses estimates of total population size to evaluate annual mortality and to assess whether mortality is sustainable.  Sustainable mortality establishes a limit on the number of grizzly deaths that can occur given population objectives.  Information from these studies is crucial to evaluate trends in the grizzly bear population and assess the long-term health of the population.

Each year the IGBST posts their annual reports online.  These documents, going back to 1989, summarize results of grizzly bear monitoring and research conducted in the Greater Yellowstone Ecosystem by the IGBST.  The reports also contain a summary of grizzly bear management actions to address grizzly bear-human conflict situations.

A grizzly bear in the Greater Yellowstone Ecosystem forages on greens in a meadow. A grizzly bear can weigh over 600 pounds, and owes that to being an opportunistic omnivore. The IGBST has documented that Yellowstone grizzly bears consume a wide variety of foods, ranging from herbaceous plants, tubers, berries, and nuts to animals, insects, and fungi. Their diets can shift on a daily, weekly, seasonal, and annual basis, which has so far enabled them to adapt to changing food supplies. (Credit: Jake Davis. Image by Jake Davis.)

Why an Interagency approach to science?

Yellowstone grizzly bears are one population and range across multiple jurisdictions in three states, including two national parks, five national forests, and tribal lands.  Today, the IGBST includes representatives from the U.S. Geological Survey, National Park Service, U.S. Fish and Wildlife Service, U.S. Forest Service, the Eastern Shoshone and Northern Arapaho Tribal Fish and Game Department, and the wildlife agencies of the states of Idaho, Montana and Wyoming. This interagency approach ensures consistency in data collection over multiple jurisdictions and allows for combining limited resources to provide wildlife managers with the scientific data needed for the continued biological recovery and management of the Yellowstone grizzly bear.  The IGBST serves as a boundary organization that “bridges science and policy, and ensures that science input is credible.”

Ensuring the future viability of grizzly bears in the Greater Yellowstone Ecosystem will require continued collection of reliable scientific data and new studies so that wildlife managers can make informed decisions.  Scientists with the IGBST will continue to provide this critical information to state, tribal, and federal agencies to guide successful conservation of the Yellowstone Grizzly Bear.

The USGS provides the impartial scientific information needed to manage America’s natural resources and to help endangered and threatened species recover.  This research is supported in part by the USGS Ecosystems program, which provides impartial science, tools, and decision support to our Nation’s natural resource managers, with particular focus on the science needs of the Department of Interior bureaus to conserve species, lands and priority ecosystems.

Yellowstone grizzly bears inhabit federal, state, tribal, and private lands, and long-term research requires careful coordination across governmental levels. The Interagency Grizzly Bear Study Team (IGBST) is an interdisciplinary group of scientists and biologists responsible for long-term monitoring and research efforts on grizzly bears in the Greater Yellowstone Ecosystem (GYE). The team was formed by the Department of the Interior (DOI) in 1973 and today’s members include representatives from the U.S. Geological Survey, National Park Service, U.S. Fish and Wildlife Service, U.S. Forest Service, the Eastern Shoshone and Northern Arapaho Tribal Fish and Game Department, and the States of Idaho, Montana, and Wyoming. This interagency approach ensures consistency in data collection and allows for combining limited resources to address information needs throughout the GYE. The study team, now led by the U.S. Geological Survey, has conducted research on this the Yellowstone grizzly bear for over 40 years, perhaps the largest collection of scientific information on any bear species in the world. This video highlights what decades of science tell us about this charismatic species and its conservation. The USGS provides the unbiased science needed to manage America’s natural resources and to help endangered and threatened species recover. The USGS led Interagency Grizzly Bear Study Team is part of the USGS Northern Rocky Mountain Science Center. The center is part of the Northwest Region of the USGS. Scientists from the Center work in the northern Rocky Mountains of the United States and across the U.S. Many of their scientists work throughout the world on issues as diverse as global climate change, aquatic ecology, wildlife diseases, bison ecology, and large carnivores. Suzanna Soileau, Northern Rocky Mountain Science Center (Public domain.)