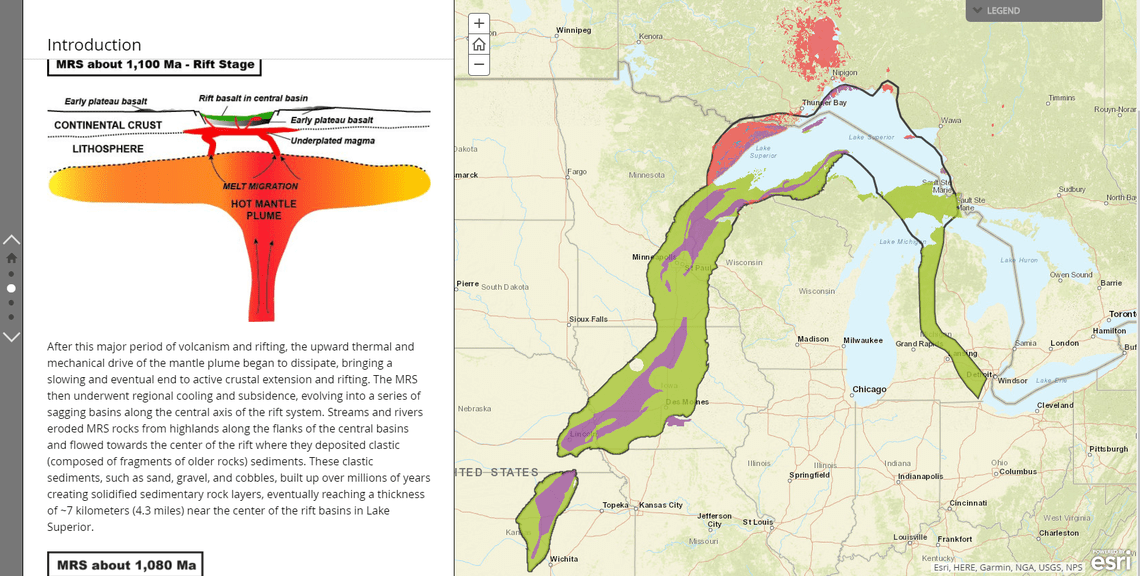 Meet the Midcontinent Rift, one of the most geologically fascinating regions in the United States and Canada.(Public domain.)

Now, you too can learn some of that history and see a small part of the mineral potential of the United States without leaving your comfortable chair! The USGS has just released a new interactive Story Map describing the Mineral Deposits of the Midcontinent Rift System.

The Midcontinent Rift System, which curves for more than 2000 km across the Upper Midwest, is one of the world’s great continental rifts. Rifting began about 1.1 billion years ago, when the Earth’s crust began to split along the margin of the Superior craton. Rifting ended before the crust completely opened to form a new ocean, and as time passed rift rocks were buried beneath younger rocks. With erosion and glaciation, the ancient rocks of the Midcontinent Rift were exposed in the Lake Superior region, creating much of its spectacular shoreline.

Learn the geologic history behind the mining history in the Great Lakes.(Public domain.)

In the Lake Superior region, rocks of the rift contain a wealth of mineral resources that formed by magmatic and hydrothermal processes during the ~30 million year course of rift development. Rift rocks are host to Michigan’s storied native copper deposits, and contain significant copper and nickel that were deposited during various stages of rift development.

In this Story Map, mineral deposit locations and descriptions, compiled from the USGS Mineral Resource Data System and the Ontario Geological Survey Mineral Deposit Inventory, are categorized by mineral commodity, mineral deposit type, and the relative time frame of mineralization.

Characterizing the mineral resources of the Midcontinent Rift System is a priority of the USGS Mineral Resources Program, and we hope you enjoy this Story Map that tells just part of the amazing story of this important geologic feature.

Much of the Great Lakes’ mineral wealth can be traced to the Mid-Continent Rift. Here is a generalized geologic map of the Midcontinent Rift System. Modified from Dean Peterson, Duluth Metals.(Public domain.)

Up in the Air to Look Deep Underground