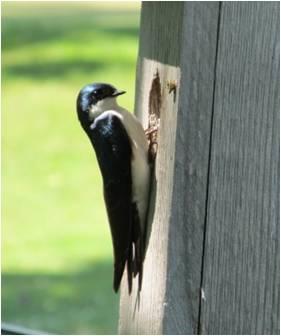 While exposure was low at most sites, USGS scientists found high concentrations of dioxins and furans in tree swallow eggs from Midland, Michigan, and from the Saginaw River and Bay.​​​​​​​ (Thomas W. Custer, USGS)

Birds at most study sites in the Great Lakes basin were minimally exposed to most environmental contaminants, with the exception of high exposure to dioxins and furans in central Michigan, according to research published today.

Scientists with the U.S. Geological Survey collected tree swallow eggs from 69 sites across the Great Lakes in 2010-2015, including 27 sites designated as Areas of Concern, or AOCs, by the Great Lakes Water Quality Agreement. They tested the eggs for 26 pesticides and other contaminants that could have harmful effects on bird reproduction and development. While exposure was low at most sites, the scientists found high concentrations of dioxins and furans in eggs from Midland, Michigan, and from the Saginaw River and Bay AOC downstream of Midland.

“Our findings are valuable for wildlife managers tasked with protecting birds in the Great Lakes basin, and can be used to assess Beneficial Use Impairments at AOCs across the Great Lakes,” said Christine Custer, a USGS scientist and the lead author of the study.

Scientists tested the eggs for industrial products that can negatively affect animal health, such as polychlorinated biphenyls, or PCBs. The findings showed that:

Dioxins and chlorinated dibenzo furans are a pollutant that results from high temperature burning, such as incinerators, and during the production of some industrial chemicals such as PCBs and herbicides. The findings specific to Midland and the Saginaw River and Bay AOC included:

“Remediation efforts are planned, underway or completed by U.S. EPA at numerous AOCs, which should further reduce bird exposure to many of these pollutants,” Custer said.

Over 90 collaborators assisted with the project, including all levels of government, private companies and corporations, non-governmental organizations and private citizens.

The Great Lakes Restoration Initiative and the USGS Contaminant Biology Program funded the study, which was published today in the journal Environmental Toxicology and Chemistry.