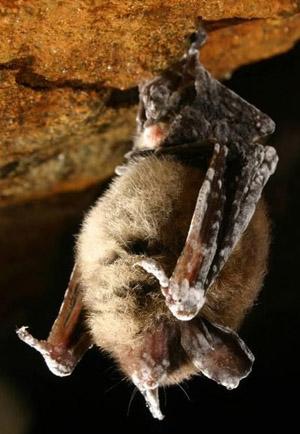 USGS scientists tested samples collected from bats, the environment and equipment at eight bat hibernation sites in Kentucky, Indiana, Ohio, Tennessee and Virginia. They found that bats occupying such sites in summer can harbor the Pd fungus on their skin, and that Pd is more readily detectable in their guano, or feces.

The scientists also detected Pd on clothing and equipment taken inside and near caves and mines used by bats. These detections demonstrate that gear exposed to fungal-infected environments is a potential mechanism for Pd spread, even during summertime when the prevalence of WNS is low. WNS is not known to affect humans, pets, livestock or other wildlife.

“Our findings provide insights into additional means by which Pd may be dispersed and further contribute to the spread of this devastating disease that threatens agriculturally and environmentally valuable bat populations,” said Anne Ballmann, a USGS scientist and the lead author of the report. “This information will further help inform managers working to control the westward movement of WNS in North America.”

Between July 18 and August 22, 2012, Ballmann and her colleagues collected swabs from bat wings, cave walls and equipment used in and near the study sites. They also collected guano from individual bats and floor sediment in underground summer roost sites. Findings include:

No bats showed visible signs of WNS during the course of this study, even though the disease-causing fungus was found. Although exposure to Pd does not result in WNS during summertime, the study showed that the fungus that causes the disease can be transported by bats and people visiting contaminated sites in summer.

First detected in New York State in the winter of 2006-2007, WNS has spread to 31 states and five Canadian provinces. The disease is named for the white fungus that infects the muzzle, ears and wings of hibernating bats. Scientists at the USGS National Wildlife Health Center discovered, characterized and named the fungus that causes WNS, and pioneered laboratory techniques for studying effects of the fungus on hibernating bats.

Decontamination guidance for cave visitors to help reduce the risk of human-assisted movement of Pd can be found online.

The USGS is part of an international coordinated response to WNS, which is led by the U.S. Fish and Wildlife Service.